6 Things You Can’t Miss In Paris

United Kingdom has always fascinated tourists from across the globe. The amazing locales and scenic beauty of the United Kingdom attracts travelers. Moreover, the enchanting

If you’re looking to rent a car and don’t know where to start, it can be hard to know what you should be searching for

Stay Happy and Safe on a Cruise

Cruise travel has become the most popular mode of transportation for tourists visiting different tourist spots. It is a better option than air travel in

Travel is the general movement of humans between distant cultural and geographical locations. Travel can be done with or without personal luggage, by foot, car,

Understanding Travel in General – How Many Different Forms Do We Have?

Travel is the movement of individuals between various distant geographical locations at various times. Travel can either be one-way or round trip, done by automobile,

How to Get an Auto Insurance Discount

Discount hunting for a specific purpose is something that should never be done in isolation, so if you’re specifically looking for discounts on something like

Major Airports and Their Locations

An airport is generally an aerodrome with long runways, usually for commercial aircraft. Commercial airports often have a control tower and facilities to house and

Driving holidays give you the opportunity to truly experience everything that a country has to offer; they give you flexibility in visiting the locations of

Horse racing is one of the post popular sports in the world and there are some fantastic events worth checking out across the globe. Royal

Cycling excursions are a great way to explore India. You can mix sport, nature and culture when you are touring on a bicycle. The beauty

Paris was on my hit list to visit with Steve for ages. We’d both been previously with friends and exes, but I wanted us to take a break in France’s beautiful capital together. I think it was the girly, romantic side of me I am normally able to repress taking over, wanting to experience the most romantic city in the world with the man I love. YUCK, YUCK and YUCK again!

But Paris has and probably always will be one of my most favourite cities in the world, and our holiday there this Easter was simply perfect.

I’ve put this article together simply to celebrate the highlights of Paris, and to give those who haven’t yet visited the city a taste of what they’re missing…

It it’s your first time in Paris I’d recommend taking advantage of the city bus tour service to get around. The tour bus might be a little more expensive than the subway but it allows you to soak up the city’s relaxed, vibrant atmosphere, and take in a lot more of its landmarks – who wants to spend time underground on a subway system that’s identical to every other one of the planet of they can help it?

I liked the tour bus because it gave me opportunity to people watch, and there are certainly rich pickings of weird and wonderful moments to observe in this eclectic city!

I’ve stuck the Eiffel Tower at the top of my list simply because it’s the city’s icon – but it’s also bloody awesome as well! For me, I didn’t just get the excitement of experiencing Paris from a bird’s eye view, but got the hilarity of Steve’s reaction to heights as well – he HATES them! I definitely don’t think a trip up to the top of the Eiffel Tower would make his list of highlights…

I highly recommend you visit early in the day if you want to go right to the top of the tower as its highest accessible point often becomes saturated with visitors, and then access is only permitted to the mid-level of the tower. Avoid being disappointed!

I don’t think you’ll find this museum on many recommendation lists, but this is definitely one for the open-minded.

Besides being a great place for some light-hearted fun, it’s also pretty fascinating looking at how people’s attitudes to sex have changed over the years, and how it’s presence has altered and developed in art and the media over the last few decades. Fun and education; what more could you want?

I LOVE the film The Da Vinci Code –the bit at the end when Tom Hanks is kneeling down at the pyramid at The Louvre in is so moving! (I really am sad!) It’s one of Paris’ top attractions, and hosts the works of Da Vinci – including the Mona Lisa, – Michelangelo,  Raphael and Greek sculptures such as the Venus de Milo Don display. My verdict: definitely worth a visit.

TOP TIP: be really sneaky and skip the long queues at the pyramid entrance by accessing the museum through its underground entrance through the Carousel de Louvre shopping mall! (This is also where you’ll find La Pyramide Inversee (the inverted pyramid) – where Tom Hanks kneels down!

Notre Dame Cathedral is my personal highlight of my trip to Paris. End of.

The French Gothic architecture is stunning, but my favourite thing about the cathedral is the quirky gargoyles watching over the city in every direction.

Don’t make the mistake Steve and I did: book in advance as the queues at the cathedral are long, and there are only so many games of the Celebrity Name Game a person can take!

You HAVE to add this to your itinerary – it ain’t cheap but it is a great way to kick-start a night out and is well worth the money. Steve showed zero reluctance to add it to out To Do list when he realised the lovely lady dancers would be topless, but one of my favourite parts of the show was the shadow puppet act – I know that sounds really geeky and childish but trust me, it was hilarious!

I’m well aware the theme of this article seems to be book in advance, but it’s a good idea for the Moulin Rouge because you can sometimes get discounts with booking on line, and with it being a pricier activity in Paris, every little helps!

My first glimpse of La Basilica du Scare Coeur sitting proudly on top of Monmarte hill literally took my breath away. I guess Steve and I were lucky because the weather whilst we were in Paris was glorious, and so we got to view the magnificent white building gleaming in the sun against a cloudless, brilliant blue sky. 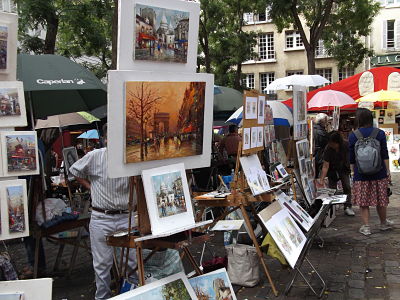 But what we loved most about our visit to Sacre Coeur were the quaint little cobbled streets and artists lining them within the area of Monmarte. We spent a whole lazy afternoon chilling out amongst the street artists, cafes and treasure troves the area has to offer. It was also rather a drunk and childish afternoon that I may very well not remember in all its entirety – but I’m sure we were in Monmarte, honest…!